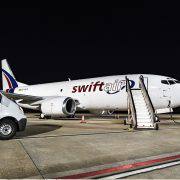 On 20 th March Swiftair received, for the 2 nd year in a row, the FedEx “BZ” award in recognition of it’s outstanding performance during peak period & for helping FedEx deliver the Purple Promise to it’s customers. The criteria for recognition include a min. regularity of 99,7% and a dri zero of 99,3%, which is measured on flights performed from 13 November till 24 December. Swiftair made 395 flights for FedEx during this period, of which only 2 were delayed and 1 cancelled & therefore achieved FDX performance targets in full 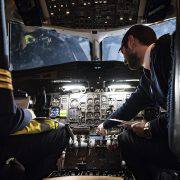 MAIS manages a daily Swiftair ATR72F route between Lisbon and Funchal in Madeira Island. MAIS joint venture mission aimed to give a boost to the local economy, overcoming the lack of a dedicated air freighter, connecting the Island with the mainland.

SWIFTAIR’s prior experience in Canarias and Baleares islands, next with its route performance to Funchal, with high standards of operational regularity and reliability, has been a key factor to attract new customers onboard, and gaining market share.

Madeira economy is expected to watch a boom on its fish exports, mainly tuna and aquaculture species. MAIS has the opportunity to become a key player for the associated supply chains, allowing to establish SWIFTAIR as a top operator between Continental Europe and its different archipelagos.

MAIS joint venture also gave SWIFTAIR the opportunity to expand its base at Lisbon airport, having been recently granted a self-handling license from the Portuguese civil aviation authority (ANAC). For this route SWIFTAIR has been flying the ATR72, both the Large-Cargo- Door and the 500’ depending on the expected monthly payload. 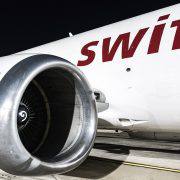 On 1 March 2018 DHL awarded a charter contract to Swiftair involving the operation of 2x ATR72F aircraft from Budapest airport to destinations in Romania, such as Cluj and Timisoara.

The main characteristics of the ATR72-200F aircraft include a 75m3 cargo bay with a max payload of 8 tons and main cargo door dimensions of 1,29m x 1,53m. The aircraft has a maximum take-off weight of 22 tons and has 6 cargo holds with a maximum floor rating of 400 kgs/m2. The aircraft is configured with vertical nets for a maximum loose load operation.

Start date for this operation set on 02 April 2018 for an indefinite period.

Routes were previously covered by Antonov 26 aircraft operated by Raf-Avi of Letonia.